Mom rocks. And if you’ve arrived at this gift guide, she probably sings, strums or pounds the drums with animalistic fervor. Here are eight gifts she’ll love more than a scarf.

Ernie Ball Music Man St. Vincent Rosewood Signature Guitar, $1,899: This axe is sexy (like mom), designed by a woman and easy to wield. 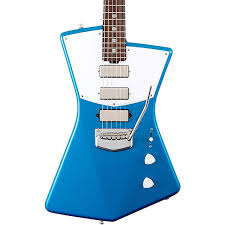 Rock On Throw Pillow, $29.99: It’s all about the cool accents and pops of color.

Hits So Hard: A Memoir by Patty Schmel, $18: Hole’s longtime drummer offers a candid look at Seattle’s grunge scene, addiction and redemption through music and motherhood.

Guitar String Bracelet, $13: Choose something pretty, delicate and drawn from the instrument she loves best.

Debbie Harry framed print, $199 and up: An inspiring shot of Debbie Harry of Blondie, performing live at The Winterland Ballroom in 1978 in San Francisco, is perfect for a home office or rehearsal space.

Online Guitar Lessons, $119: What’s the one thing mom can’t get enough of (besides her kiddos)? Time. A set of online lessons from the pros at New York City Guitar School will help her brush up on her techniques and learn something new during her downtime.

—- Marisa Torrieri Bloom is a writer, guitar teacher, mom, and the founder of Rockmommy.

Not too long ago, rock guitarist St. Vincent — also known as Annie Clark — unveiled an edgy new guitar specifically designed to fit a woman’s body and accommodate her smaller hands.

Although pioneers like Daisy Rock have been churning out female-friendly instruments for a while, the news was pretty groundbreaking for a few reasons. Until now, most of the signature guitars bearing a woman’s name are actually designed by men at big-name guitar purveyors like Fender and Gibson. Also, while St. Vincent did get a little help from engineers at Ernie Ball’s California headquarters, she was very much involved in the design and development process for her signature instrument.

So will this set the precedent for more professional shredders to do the same?

We can only hope.

For now, here are five great signature guitars that some of the best female rock guitarists have helped bring to market:

Legendary Heart guitarist-singer Nancy Wilson — and rockmommy of two — tears it up onstage (side note: I’ve tried playing “Crazy on You” for years and still can’t do it right!) and in the studio. So it is only fitting that Gibson unveiled the robust signature Nighthawk in her honor. The $1,499 guitar features a comfortable ribcage body contour, rosewood fingerboard, a Nighthawk mini-humbucker and Nighthawk Lead humbucker, with five-way switching. It’s visually stunning, too, with Grade-AAA maple top dressed in a high-gloss nitrocellulose Fireburst finish with Cherry back and neck, and a commemorative “Fanatic” truss-rod cover.

4. PRS Orianthi
Aussie guitarist Orianthi, who has strummed for Carrie Underwood, Alice Cooper, and so many other big names, was on the brink of taking her career to the next level as Michael Jackson’s guitarist for his 2009 world tour, when, sadly, he passed away in June of that year. Her signature guitar features:

Daisy Rock is one of the most innovative, pro-female companies out there, with its huge array of electric and acoustic instruments designed for girls and women of all ages. The Bangles Signature Model, inspired by the quintessential all-girl 1980s band, is a particularly beautiful piece, with its piercingly pure tone, slim and narrow neck suited for smaller hands, and vintage look.

In writing this blog, I’ve learned that while there are plenty of lists for “best female guitarists” and “best rocker moms,” finding a signature guitar that possesses the name of a female guitarist and is tailored to a female’s physical features is a near impossible feat.

Therefore, rock mamas — or heck, even dudes — who are looking for something that is designed with a woman in mind ought to take a closer look at these electric works of wonder.