I’m a pretty wholesome mom, inside and out. Except when I write songs. When I sit down with my guitar at night and start strumming, the first lyrics that come to mind aren’t about dinosaurs and eating vegetables. I drift to another place — my mind drawn to more salacious topics, like sex and politics or even gay rights and gun ownership. I’ve been known to drop more F bombs than your average mom singer (is there an “average mom singer,” though?). 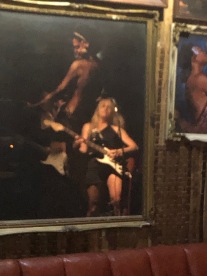 Of course, there’s nothing wrong with songs about dinosaurs — kindie-rock performers like Laurie Berkner write some killer dinosaur tunes. But it’s not the way I’m wired. For this reason, I use a stage name that’s separate from my real identity so my guitar students will have a harder time finding my music online.

Here’s the problem: Unlike my contemporaries who are famous, I don’t have the luxury of playing whatever gig at whatever venue I want whenever I want. While I believe moms should be proud to be themselves — whether they want to write about dinosaurs or sexual fantasies — club promoters and bar managers don’t aways see it that way. So unless I’m playing a dive bar or indie-rock show in Brooklyn, I feel pressured to alter my lyrics considerably. Sometimes, I’ll have to completely gut a song, lyrically — which inevitably leaves me feeling a little empty.

This happened at First Night Delaware about 15 years ago, with my D.C. band Grandma’s Mini. We were given $400 to play a New Year’s Eve gig for four hours, only to learn last minute that we would be playing four back-to-back sets in a library. Yes, a LIBRARY! Children would be coming to see us!! If you’ve ever heard Grandma’s Mini — whose most famous song, “Learn to Love Your Sh*t Job” was featured in the indie flick Washington Interns Gone Bad — you know that most of our songs aren’t meant for the ears of innocent children. So it was a mad, 20-minute scramble for me and Ann (my music partner) to come up with alternate lyrics. 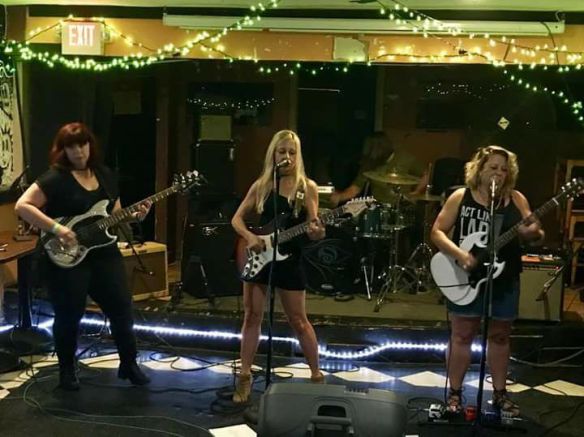 Playing “not so innocent” music with my band Grandma’s Mini

While I don’t mind playing cute songs like “Baby Shark” or “Shiny” when I’m playing a library gig or for my sons’ preschool, I hate watering down content like this. Sometimes I wonder if it’s better to turn down gigs altogether than change in the slightest, which can feel inauthentic. When money’s involved, the decision gets a little harder. Ann and I weren’t about to let go of $400 after we’d booked hotels and arrived on site.

There are other considerations too. I’m a super-busy mom who rocks — but also works. I barely have time to market my band, or any musical project I’m involved in. I can’t be picky. If I get asked to play at any event, it’s an honor.

On the other hand, life is short: People shouldn’t have to compromise who they are in their hearts. Cardi B doesn’t!

What would you do if you were in my shoes? Take the gigs that require a change in lyrical content, or just be grateful for what you get and adapt as needed?

I’ve been in bands easily half my life. Much of the time, they’re formed out of friendships, work/school connections or circumstance, plus being in the right place at the right time.

That’s how Grandma’s Mini, my longest-running Washington, D.C., rock band with my bestie Ann, came together. I met her at a new job, we clicked, I had her over to “jam,” and before the night was over, we’d written five or six songs. The same thing happened when I formed Marisa Mini & The Underage Hotties with my friend Morgan. I started working at the New York City Guitar School, met Morgan, clicked with Morgan, and bam — she joined my namesake band. From there, we started other bands through the NYC Guitar School Connection.

A few other times, I’ve used personals — like when I met my friend Debbie, a drummer and singer, who wanted to launch her own musical project. Or, I’ve met musicians through open mics and the music “scene” — rock shows at bars, mainly. And I met one of my guitarists while he was working at Guitar Center in Brooklyn.

But as a parent, I don’t have time to work the scene, to make friends and connections by going to lots of shows or open-mic nights. I barely have time to go to Guitar Center, or any music stores. I’m lucky if I see one band a month. Much of this has to do with the reality that I live in a suburb, a beach town in Southeast Connecticut. Were I still living in New York City, I’d find musicians left and right.

[RELATED: The Ramoms Take on The Ramones, Mixing Motherhood and Punk Rock in Philly]

At the moment, I’m at the mercy of Craigslist — which weirds out some people — and whoever finds my Bandbox profile, in trying to find a bassist and drummer. Craigslist has given me a few good leads — a bassist who’s also a dad, and a drummer who lives 40 minutes away. But the drummer bowed out at the last minute after deciding my musical interests didn’t match hers, and I have yet to meet the bassist.

Another challenge is that SO many people in my neck of the woods want to start cover bands! Don’t get me wrong — I love playing a good cover or two, and at one point, started my own all-girl cover band. But I want to write, sing and play originals. I want to create, not recreate, a song.

So I’m hopeful, and I’m open to suggestions. Is there some untapped band-finder resource out there for suburban moms? An online directory of bored drummers who live in New England? Please share in the comments if you have any good tips.

— Marisa Torrieri Bloom is the editor and founder of Rockmommy.