Kids Imagine Nation — an Orange County-based, three-piece kids’ music group with members from ska band Suburban Legends — is releasing its second album, a cheerful party record that should be played while your 6-year-old frolics about in a bouncy house (or in the kitchen). The record, simply titled Kids Imagine Nation Two,  comes out in September. I’ve already listened and can attest that it’s loaded with lots of super high-energy tunes — my favorites are “Rock Party” and the hilarious kiddie workout accompaniment “Exercise.” 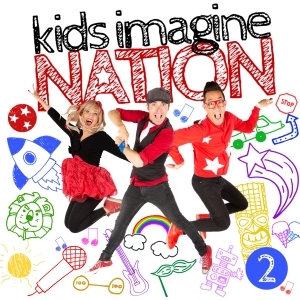 The album is the perfect anthem for Southern California parents who skate or listen to lots of ska, surf rock or West Coast punk fans. Preschoolers will vibe on the good energy. Think of it this way: If Gwen Stefani launched a kiddie music side project, this is what it would sound like.

Speaking of which, if you’re in Los Angeles, check out the group’s early morning performance at The Grove on October 4, filled with more original songs and stories that entertain and inspire kids.