David Grohl is a rockstar in every sense of the word. I learned this firsthand when I finally got to see the Foo Fighters last night at a sold-out show at Madison Square Garden. He growls, yelps, roars and plays guitar like a motherf*cker — he also drops plenty of F-bombs, which is OK for him because, you know, he gets paid to drop them. It’s part of being Dave Grohl (I’ll try to remember that next time I feel guilty for cursing at my son’s daycare).

I could write a prolific review of his band’s sensational performance last night, a set that spanned the band’s 23 years of making music. But you can fetch a well-written review on plenty of other sites like this one.

[RELATED: Johnny Clay of Ants Ants Ants Discusses Making Music and ‘Soaking it All In’]

Instead, I’ll touch on what I found to be the most heartwarming part of the Foo Fighters’ performance: Daddy Grohl inviting his 12-year-old daughter Violet Grohl onstage to sing backup for several new songs: My favorite, by far, “The Sky is a Neighborhood”:

It is abundantly clear that Grohl is over the moon for his oldest little girl — between the hugs and his constant praise of her performance (he called her “the shining light and love of my life” during Monday’s set at MSG!). And it’s also pretty clear that she looks up to him, curse words and adult reminiscing of stoner days be damned. They had this funny exchange in the second half of the 2.5-hour set, where she was rolling her eyes at him, and he was embarrassing her with praise.

Here she is on the big screen: 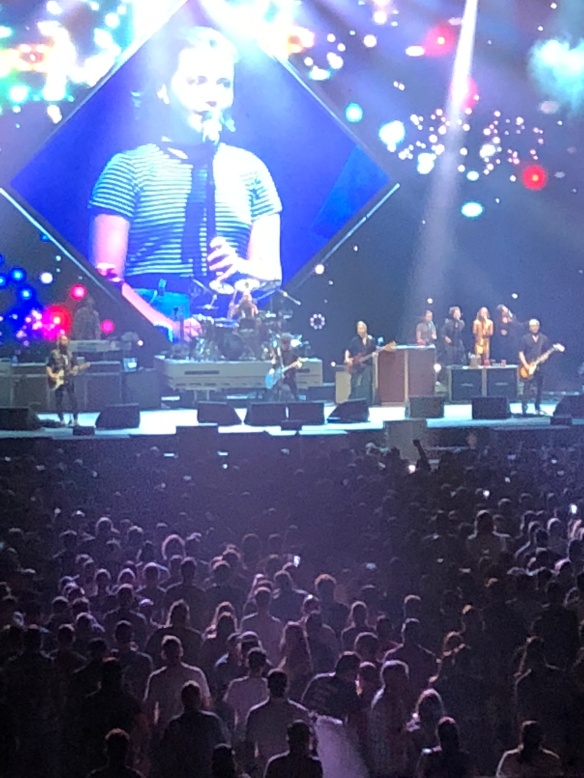 As a mom, I can only hope things are this great when my kids are 12!

— Marisa Torrieri Bloom is the founder and editor of Rockmommy.